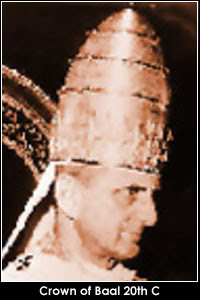 The Crown of Ba'al, also known as the Papal Tiara and Triregnum is a three-tiered jewelled papal crown and symbol of claimed papal supremecy since the 16th Century. Since the 16th Century, it has featured prominently as part of the coat of arms of the Vatican, usually with the crossed keys of claims of authority from St Peter. Any text or other claim that alleges the three-tiered crown is older than the 16th Century is deliberately false.

Prior to Pope Boniface VIII (1294-1303) the antipopes of the Roman Cult wore fabric, not metallic headdress, similar to the Persian High Priests of Mithra. However in 1302 Boniface issued his infamous Papal Bull Unam Sanctam, being the first Express Trust claiming control over the whole planet and effectively "King of the world". In celebration, he commissioned a gold plated headdress in the shape of a pinecone, with an elaborate crown at its base.

The pinecone is an ancient symbol of fertility and one traditionally associated with Ba'al as well as the Cult of Cybele.

The 1st Crown of Crown Land

While Pope Boniface VIII was the first leader in history to create the concept of a Trust, the first Testamentary Trust through a deed and will creating a Deceased Estate was not until Pope Nicholas V in 1455 through the Papal Bull Romanus Pontifex. This is only one of three (3) papal bulls to include the line with the incipit "For a perpetual remembrance." This Bull had the effect of conveying the right of use of the land as Real Property from the Express Trust Unam Sanctam to the control of the Pontiff and his successors in perpetuity. Hence, all land is claimed as "crown land".

This 1st Crown is represented by the 1st cestui Que Vie Trust created when a child is born, depriving them of all their beneficial entitlements and rights on the land at birth.

The 2nd Crown of the Commonwealth

The second Crown was created in 1481 with the papal bull Aeterni Regis meaning "Eternal Crown" by Sixtus IV being only the 2nd of three papal bulls as deeds of testamentary trusts.

This Papal Bull created what is known as the "Crown of Aragon", later known as the Crown of Spain, being the highest sovereign and highest steward of all Roman Slaves subject to the rule of the Roman Pontiff. Spain lost the crown in 1604 when it was granted to King James I of England by Pope Paul V after the successful passage of the "Union of Crowns" or Commonwealth in 1605 after the false flag operation of the Gunpowder Plot.

The Crown was finally lost by England in 1975 when it was returned to Spain and King Carlos I, where it remains to this day.

This 2nd Crown is represented by the 2nd cestui Que Vie Trust created when a child is born being the sale of the birth certificate as a Bond to the private central bank of the nation, depriving them of ownership of their flesh and condemning them to perpetual servitude as a Roman person, or slave.

The 3rd Crown of the Ecclesiastical See

The third Crown was created in 1537 by Paul III through the papal bull Convocation also meant to open the Council of Trent being the third an final testamentary deed and will of a testamentary trust, being the trust set up for the claiming of all "lost souls", lost to the See.

The Venetians assisted in the creation of the 1st cestui Que Vie Act of 1540 to use this papal bull as the basis of Ecclesiastical authority of Henry VIII. This Crown was secretly granted to England in the collection and "reaping" of lost souls.

The Crown was lost in 1815 due to the deliberate bankruptcy of England and granted to the Temple Bar, which became known as the Crown Bar, or simply the Crown.


The Bar Associations have been responsible ever since in administering the "reaping" of the souls of the lost and damned, including the registration and collection of Baptismal certificates representing the souls collected by the Vatican and stored in its vaults.

This 3rd Crown is represented by the 3rd cestui Que Vie Trust created when a child is baptized being the grant of the Baptismal certificate by the parents to the church or Registrar being the gift of title of the soul. Thus, without legal title over one's own soul, a man or woman may be "legally" denied right to stand as a person, but may be treated as a creature and thing without legally possessing a soul. Hence, why the Bar Association is able to legally enforce Maritime law against men and women- because they can be treated as things, cargo that does not possess a soul.