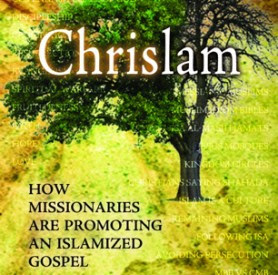 In the world of questionable and sometimes downright silly Bible translations, one would think that it couldn’t get any worse.


After all, we’ve seen the “In da beginnin’ Big Daddy created da heaven an’ da earth” Ebonics Bible, as well as the “Apostle’s Log” Star Trek English paraphrase Bible. In a more serious effort, the New Oxford Annotated Bible was created in part by pro-”gay” and feminist scholars in order to set forth a more “gay” revisionist interpretation of Scripture.

But now there is a major controversy developing as the latest altered Bibles are being created by organizations that most would think of as being more conservative and reasonable. At the forefront of the controversy are the Wycliffe Bible Translators, the Summer Institute of Linguistics and Frontiers, all of which are producing Bible translations that remove or modify terms which they have deemed offensive to Muslims.

Included in the controversial development is the removal of any references to God as “Father,” to Jesus as the “Son” or “the Son of God.” One example of such a change can be seen in an Arabic version of the Gospel of Matthew produced and promoted by Frontiers and SIL. It changes Matthew 28:19 from this:

“cleanse them by water in the name of Allah, his Messiah and his Holy Spirit.”

A large number of such Muslim-sensitive translations already are published and well-circulated in several Muslim-majority nations such as Bangladesh, Indonesia and Malaysia.

According to Joshua Lingel of i2 Ministries, “Even more dramatic a change is the Arabic and Bangla (Bangladesh) translations. In Arabic, Bible translations err by translating ‘Father’ as ‘Lord.’ ‘Guardian.’ ‘Most High’ and ‘God.” In Bangla, ‘Son of God’ is mistranslated ‘Messiah of God’ consistent with the Quran’s Isa al-Masih (Jesus the Messiah), which references the merely human Jesus.”

In response to these translations, many within the evangelical missions movement as well as many former Muslim converts and indigenous Christians from countries where these translations are being used, are indignant. After numerous appeals have been rejected, a petition has been launched to call for the end to the translations.

The indigenous believers see the introduction of these American-made translations with which they so strongly disagree as a form of American cultural imperialism or colonialism.

According to Turkish pastor Fikret Böcek, such new translations are, “an all-American idea with absolutely no respect for the sacredness of Scripture, or even of the growing Turkish church.”

According to the testimony of one leader from a church in Bangladesh, one of the most problematic aspects of this development is that it gives fuel to the often-heard Muslim claim that Christians are liars who change their Bibles to deceive Muslims. Once a Bible translation is well established within any country, the introduction of such radically different translations reinforces the Muslim charge and undermines trust in the Christian community.

According to Lingel, who can be contacted at info@i2ministries.org, the crisis in translation methodology is largely due to “a postmodern literary bias” that has crept into some translation circles in recent decades. Such translations would seem to demand that the divine author of the Bible change rather than the Muslim reader.

“But Jesus demanded that many of his listeners change,” says Lingel, explaining that instead of demanding that Muslim readers change their understanding of God, these translations seem to convey that God must accommodate the religious prejudices of Muslims.

“Lingel is also the co-editor of a new book, “Chrislam: How Missionaries Are Promoting an Islamized Gospel,” which represents the first major response against Muslim-sensitive translations as well as the larger movement often referred to as the “Insider Movement” or “Chrislam.”

According to reports, of the roughly 200 translation projects Wycliffe/SIL linguists have undertaken in Muslim contexts, about 30 or 40 remove the terms father and son with reference to God and Jesus.

Lingel’s response is quite direct, “These projects need to be defunded.”

Yet according to a recent Forbes “200 Largest U.S. Charities” report, the Orlando-based Wycliffe Bible Translators USA is the third most well-funded religious charity in the states.

Proponents of the Insider Movement claim that this method of reaching Muslims is bearing great fruit. Opponents, however, point out that the so-called converts within the Insider Movement remain “hidden” within their Muslim culture, continue to attend mosque, pray like a Muslim, acknowledge Muhammad as a prophet, the Quran as inspired, and make the Muslim credal confession, known as the “shahada.”

Some now claim that there are as many as 300,000-1.2 million new “Insider believers” in Bangladesh. But one former Insider who left the movement and speaks out in Lingel’s Chrislam book reports that the number of insiders couldn’t be more than 10,000. According to this source, many of the claims are greatly exaggerated so as to bring in more funding from wealthy American missionary organizations.

“Other former Insiders have reported publicly that many Insiders are really Muslims who will do whatever it takes for the jobs and money they are offered by pro-IM ministries to feed their families,” Lingel says.

Further questioning the funding and support of well-known Christian organizations of this movement, Lingel recounts, “I have consulted with the leadership of the Southern Baptist Convention on missions and evangelism among Muslims at various times… [Who] stated that there are tens of thousands of Isa al-masih jamaats, or ‘Jesus congregations,’ in northern Africa. But the members of these jamaats call themselves Muslims, do not believe in the Trinity and believe Muhammad is a prophet of God. Are they Christians or Muslims? Why talk about them in terms of missionary success?”

In response to what many Christians see as a heretical movement based on deception, Lingel’s i2 Ministries is in the process of completing a video-based university called Mission Muslims World University, with 40 of the most experienced professors from around the world teaching courses in Muslim ministries, Islamic Studies, apologetics, evangelism and discipleship.
Posted by Paraclete Edward-Jay-Robin at 1:36 a.m. No comments:

How a Stimulus Bill works....or how to float a loan with the bank not catching on...

It's a slow day in the small town of Pumphandle and the streets are deserted. Times are tough, everybody is in debt, and everybody is living on credit. A tourist visiting the area drives through town, stops at the motel, and lays a $100 bill on the desk saying he wants to inspect the rooms upstairs to pick one for the night.

Finally, the traveler comes down the stairs, states that the rooms are not satisfactory, picks up the $100 bill and leaves. No one produced anything. No one earned anything. However, the whole town now thinks they are out of debt and there is a false atmosphere of optimism and glee. And that, my friends, is how a "stimulus package" works!
Posted by Paraclete Edward-Jay-Robin at 5:54 p.m. No comments:

...with additional earlier information at:

AGENTS: If you have further info on this, involving any State, please add it here.

(Ed Note: Oregon Chief Justice Wallace Carson has now openly
acknowledged that Oregon judges and attorneys have taken false oaths
.......the truth is the great leveler, now is the time for
accountability and recompense for those who have been injured by
actors without authority who have stolen their children and destroyed
their lives without a Constitutional Contract - people in every state
need to investigate their own Constitutions and look at the judges
proper oaths, as well as what was going on around 1910 ..........
this is when the global agenda was entrenched right before WWI , and
the foundations were laid for the corporate socialist system not based
on the Constitution or the authority of the People - we lost our
sovereignty, our allodial titles, our real money backed by gold, and
now the corporate state operates under the false "implied consent"
that it OWNS EVERYTHING........ This is about the REAL PEOPLE and your
REAL RIGHTS and your REAL LAND and REAL MONEY and your CHILDREN and
POSTERITY.

Now when they take a Constitutional Oath, NOW they UPHOLD
CONSTITUTIONAL JUDICIAL DUE PROCESS. The People are the authority,
and it is our DUTY, OBLIGATION and RIGHT to enforce this Lawful
jurisdiction now. These are NOT just words, THIS IS THEIR BOND AND
CONTRACT WITH THE CONSTITUTIONAL PEOPLE/STATE OF OREGON. WITHOUT IT
THERE IS NO BOND OR CONTRACT AT ALL TO THE PEOPLE.)

Oregon Supreme Court Chief Justice Wallace P. Carson Jr. is suggesting that state judges retake their oaths of office because most of them took an incomplete one.

The Oregon Constitution requires judges to swear to uphold the federal and state constitutions and to discharge their duties faithfully and impartially.

At least 10 years ago, the secretary of state's office started sending out to newly elected judges a version of the oath that did not include the words "and impartially."

"I have absolutely no understanding how that could happen," Carson said.

Carson said Wednesday that he planned to e-mail all 163 circuit
judges, suggesting that they retake the oaths if they previously took the incomplete one. He said he intends to attach the complete version of the oath to the message.

"I'm recommending that they do sign the oath, but it's up to them," he said.

Last week, a litigant raised the oath issue during a hearing before Multnomah Circuit Judge Ellen Rosenblum. She responded by retaking the oath on the spot.

"That's one way to address it," Carson said.

Carson said he also expects to suggest that Court of Appeals judges, Supreme Court justices and circuit judges pro tem retake the oath if they took an incomplete one.

A group of activists has been raising the oath issue since at least the beginning of the year, contending that judges who took incomplete ones are invalid and their rulings void.

Carson became aware of the issue from some of these activists.

Legal experts say the failure to take a complete oath does not make a judge invalid, nor would it be a reason to overturn any decisions. No court has made a ruling on the issue.

Carson said Wednesday that the Supreme Court would take up the
effects, if any, of the incomplete oaths only if the issue is raised during the normal appeals process.

The following articles are the background for this unprecedented
acknowledgement that the courts have been for years under a fraudulent
authority...... WE THE PEOPLE HAVE MOVED THE STATE TOWARDS
ACCOUNTABILITY - NOW WE MUST HOLD THEM ACCOUNTABLE - VOID THEIR
UNLAWFUL DECISIONS, AND FORCE A RESTORED CONSTITUTIONAL JURISDICTION
AND JUDICIAL DUE PROCESS - THE OATH IS ONLY A FACADE UNLESS THEY
ACTUALLY RESTORE OUR ABILITY TO EXCERCISE OUR INHERENT RIGHTS AND
CONSTITUTIONAL LAW IN A COURT.

IT IS OPENED NOW, AND THEY ARE GOING TO ANSWER.... NOTICE THERE IS NO
REBUTTAL AT ALL - NO FACTUAL DISPUTE - JUST LIIKE IN COURT - THEY LOSE
!!! UNDISPUTED FACTS BECOME LEGAL FACT AND NOW IT IS FACT THAT THE
JUDGES ARE UNDER FALSE OATHS IN OREGON - THEY KNOW THE DIFFERENCE IS
LIKE NIGHT AND DAY - THE WORDS ARE MEAN JURISDICTIONS....ONE WHERE YOU
HAVE CONSTITUTIONAL RIGHTS AND ONE WHERE YOU ARE A CORPORATE COMMODITY
FOR THE STATE AND FEDERAL FUNDING STREAMS.......READ ON.... and by the
way, there are more words missing from the oath than "impartially" -
also "said state" which is WHO the judge is supposed to contract to,
impartially..... notice that there is NO REBUTTAL and you better
believe that this nullifies every thing these imposters have signed.

They have NO defense to this, as seen in the article, the Bars
response is "we can ignore it", just like there is NO ANSWER for the
people being destroyed by these unjust attorneys pretending to be
"judges" having no contract with the People...... read on..... this
breaks open the whole LIE that has been perpetrated on us for many
years, and it is up to SOVEREIGNS TO MAKE SURE THIS DOES NOT GO
IGNORED... IT IS TIME FOR ACCOUNTABILIITY........