From: Minister of Christ Edward-Jay-Robin: Belanger of the Church of Ecumenical Redemption International C/o near Onoway Alberta. Canada

It is our honor to congratulate you and God's will to have your continuance of reign in this your fiftieth anniversary. We are indeed fortunate to live in the Kingdom and realm of her majesty's defense and to have such a Queen and defender of God's laws to ensure justice transpires and all are protected from avarice and tyrannical lust and coveting.

We are indeed fortunate to live in such times of instant communication and vast abilities to accumulate knowledge of history and how it will affect our future.

We in defense of God's laws and encouraging others to accept them wish to bestow our sincerest thanks and pleasure at your continued adherence to your Coronation promise in the provision of the King James Bible in all of her majesty's courts and such law that it must be a letters patent version of that bible to give the court it's sanction.

If they do not subscribe to that oath and purpose of the allegiance they took to your majesty they are imposters can not be trusted and must be routed out.

Our heartfelt thanks and obedient allegiance to your majesty's defense of the faith and provision of God's justice and laws protected from the unscrupulous hands and hearts of corrupt men and women.

Guard us from knavish tricks confound their politics on this our hope we fix God save the Queen!

Your dutiful minister Of Christ loyal to the Confession of faith, her majesty's Coronation oath, and the teachings of Jesus Christ, in blessing your majesty with the receptive wisdom of her ancestors in the sacred continuance and provision of the holy sanction as defender of the faith.

Church of Ecumenical Redemption International, near [Onoway Alberta, Canada] no code 1-780-967-3915 Her Majesties reply to this email... 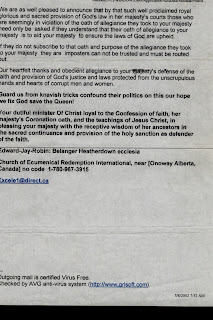 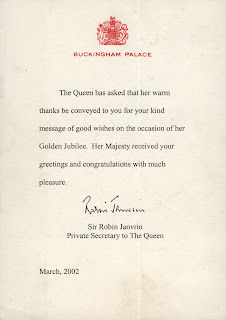 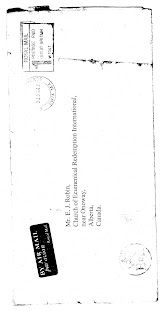 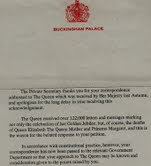 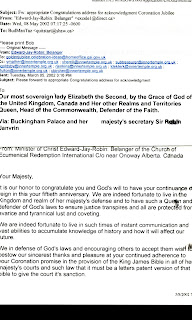