60 years of unlawful Roman Catholic rule over the UK, Canada and the Commonwealth


60 years of unlawful Roman Catholic rule over the UK, Canada and the Commonwealth 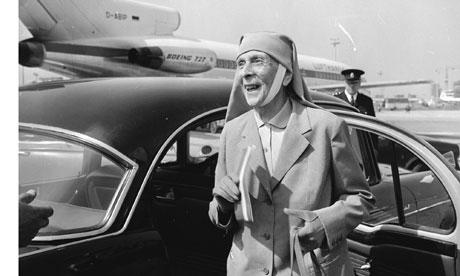 Pope Pius XII Nazi German Guards
According to lawfully established line of Succession laws Elizabeth and her children and grandchildren are all disqualified from inheriting the throne and could never be and cannot be recognized as the Crown because her marriage to a Roman Catholic – Nazi German Hitler Youth schooled Philip.  Only a Roman Catholic could enter the Hitler Youth.  Enrollment papers from the archives in Germany makes this requirement perfectly clear.  That is how and why Joseph Ratzinger – Pope Benedict XVI – was enrolled in the Hitler Youth.  Joseph Ratzinger was and is a Roman Catholic and so is Philip – of the German ducal House of Schleswig-Holstein-Sonderburg-Glücksburg.
Further evidence that Philip is Roman Catholic (disqualifying Elizabeth from succession to the Crown) is the fact that Philip’s mother was a nun.  She wore a nun’s habit at the wedding of German Elizabeth to German Philip.  In Roman Catholicism, women may serve the Sun worshiping faith as nuns or religious sisters.  No other religion on earth have women serving them as nuns.
A Roman Catholic is specifically excluded from succession to the throne; nor may the Sovereign marry a Roman Catholic. Elizabeth married a Roman Catholic.  Her uncle, Edward VIII, was dethroned for the very same unlawful action – marrying a Roman Catholic.
Elizabeth is head of the Order of the Garter … an order originally instituted for the protection of the Roman Catholic Church.  The Arms of the Order of the Garter has the Roman Catholic Crusader cross – mark of the beast – in its center.
No sovereign of England and Canada can serve the Roman Catholic Church as he or she is the head or Supreme Governor of the Church of England.  Elizabeth is a traitor guilty of high treason – undermined the lawfully established line of succession – and a fraud.  The House of Windsor is a fabricated name, never existing before 1917 when George V assumed the false name to cover up his family’s German lineage, escape certain death and defraud the people of England, Canada and all Commonwealth nations.  Elizabeth and her family has no authority whatsoever over England or Canada.  She is an identity thief.  An impostor.  An unlawful heir to the throne.

4 Comments for “60 years of unlawful Roman Catholic rule over the UK, Canada and the Commonwealth”