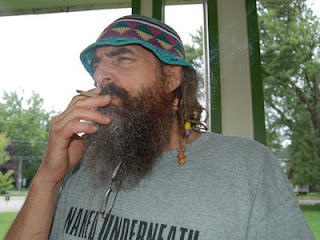 FREE MAN. Despite the Crown attorney’s calls for six months in prison, Michel Ethier left a Bracebridge courtroom a free man on Thursday. The 53-year-old Sturgeon Falls man was convicted last month for possession of marijuana. He claims he is a reverend in the Church of the Universe, which views the smoking of the drug as a religious sacrament. File photo
A sentencing hearing last week in a Bracebridge courtroom turned into a debate on the pro and cons of marijuana use.

In the end, Judge George Beatty denied the Crown attorney’s request for a six-month prison sentence, instead giving a suspended sentence to Michel Ethier for possession of marijuana.

The 53-year-old Sturgeon Falls man claims he is a reverend in the Church of the Universe, which views the smoking of marijuana as a religious sacrament.

On Aug. 10, 2008, Ethier was pulled over by police for erratic driving on Highway 11 in Bracebridge, near the Cedar Lane exit. Police said they found 376 grams of marijuana, along with eight marijuana cigarettes, in Ethier’s car.

Last month, Ethier was found guilty of possession of marijuana after he failed to convince a judge that the charges were a violation of his constitutional rights. On Thursday he appeared in court to face his sentence.

Sporting his ever-present knit cap, which he was allowed to wear as it is part of his religious dress, the bearded and dreadlocked reverend started the proceedings off by attempting to have the sentencing postponed. Ethier said he is in the process of appealing his conviction and the sentencing should be put off until that process is finished. However, Crown attorney Steve White said there is a specific appeal process that has to be followed and the judge agreed. White said Ethier has already appealed the charges in both provincial and federal court, but judges had ruled his appeals “frivolous and vexatious.”

In pursuing a six-month jail sentence, White said Ethier began smoking pot when he was 16, and was using it daily by his mid-20s. White said it was during this period that Ethier began to rack up a criminal record that came to include several break and enters and armed robbery. White said Ethier’s drug convictions alone include four counts of trafficking, five for possession and several others including cultivation, promoting the use of an illegal drug and benefiting from the proceeds of crime. He has served a considerable amount of jail time in the past, said White, and is currently facing outstanding drug charges in North Bay.

“For a drug offender, he’s the worst kind,” said White.

White called Ethier’s affiliation with the Church of the Universe a “deathbed conversion” to justify his marijuana use.

“He was a chronic user well before he adopted his current religious beliefs,” said White. “Simply because you don’t believe in a law doesn’t mean you can continually break it. There have been rulings on this time and time again.”

White said marijuana use causes harm to society and specifically certain groups, such as those with mental problems can put themselves and others in serious jeopardy by using the drug. He also said marijuana is “worse than alcohol” when it comes to impaired driving because marijuana is harder to detect.

In his own defence, Ethier told the court that marijuana has been misunderstood for decades.

“People are being misled to believe this a gateway drug. Far from it,” he said. “Cannabis is my medicine and my sacrament, and it’s the sacrament in my church.”

Ethier said he has been “unjustly incarcerated” on many occasions.

“I have done wrong to society as a younger man … but over the last decade I’ve caused no harm to anyone,” he said. “If anything, harm has been done toward me.”

Ethier now has a medical licence to possess marijuana, obtained after his arrest, and said he hopes his days of dealing with the police are over.

Both Ethier and the Crown agreed that an order of treatment would be of little use.

Judge Beatty said Parliament makes the laws on marijuana, and it is legally entitled to do so. However, he opted to let Ethier, whom he had earlier referred to as a “sympathetic defendant,” walk out of court a free man; granting him a suspended sentence and 18 months probation.