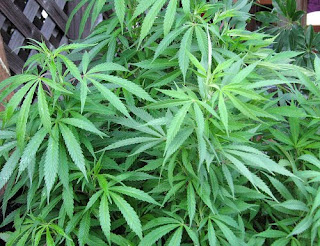 Marijuana, commonly known as Gandia can be used to treat really advanced stage brain cancer according to a recent scientific study by scientists of the Complutense University, Spain. Glioblastoma multiforme (GBM) is highly resistant to current anticancer treatments, which necessitates finding of new therapeutic strategies to improve the poor prognosis of patients suffering from this disease.

Medical Marijuana Plant
It was discovered that Tetrahydrocannabinol (THC), which is an active ingredient of marijuana as well as other cannabinoid receptor agonists, inhibits tumor growth in animal models of cancer, including glioma. This particular effect relies partly on the stimulation of autophagy-mediated apoptosis in tumor cells. Thus the combined administration of THC and temozolomide (TMZ; the benchmark agent for the management of GBM) produces a strong anti-tumoral action in glioma xenografts. This effect is also observed in tumors that are resistant to TMZ treatment.

Administration of submaximal doses of THC and cannabidiol (CBD (a plant-derived cannabinoid that also induces glioma cell death through a mechanism of action different from that of THC) remarkably reduces the growth of glioma xenografts. Treatment with TMZ and submaximal doses of THC and CBD produces a strong antitumoral action in both TMZ-sensitive and TMZ-resistant tumors.

Abovementioned findings by investigators at Complutense University in Spain prove that the combined administration of TMZ and cannabinoids could be thus therapeutically exploited for the management of GBM. The combined administration of THC and the pharmaceutical agent temozolomide (TMZ) therefore establishes strong anti-cancer activity in brain tumors which become resistant to conventional anti-cancer treatments.

The authors of these investigations have accordingly derived that the administration of THC in combination with TMZ “enhanced autophagy” (programmed cell death) in malignant tissue. According to them, “The combined administration of THC, CBD, and TMZ remarkably reduced the growth of glioma xenografts … [and] produced a strong antitumoral action in both TMZ-sensitive and TMZ-resistant tumors. Altogether, our findings support that the combined administration of TMZ and cannabinoids could be therapeutically exploited for the management of GBM (gliobastoma multiforme).”

Earlier in the year 2006 a study was published in the British Journal of Cancer. This study had reported that the intra-tumoural administration of THC is associated with reduced tumor cell proliferation in two out of nine human subjects with GBM (which is highly resistant to conventional anti-cancer treatments).

These studies have proved beyond doubt that marijuana ingredient THC is set to play a major role in combating GBM that has already become resistant to conventional anti-cancer drugs. Indeed a ray of new hope for the cancer patients!
at July 29, 2011

I have read your article, it is very informative and helpful for me.I admire the valuable information you offer in your articles. Thanks for posting it.. check it out