Repeal of Pot laws on hold till fall 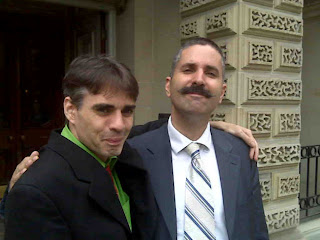 Matthew Mernagh, left, and his lawyer Paul Lewin oustside the Court of Appeal on Wednesday.

TORONTO - The troubled federal medical marijuana program was granted a reprieve until this fall when a constitutional challenge will be heard at the Ontario Court of Appeal.

Justice Donald Taliano ruled the marijuana program unconstitutional two months ago and gave Ottawa until mid-July to repair the Medical Marijuana Access Regulations (MMRA) or pot would be effectively legalized in Ontario.

Doctors’ “overwhelming refusal to participate in the medicinal marijuana program completely undermines the effectiveness of the program,” Taliano wrote in his ruling.

Federal government lawyer Kevin Wilson asked for and received an extension of that stay until Ontario’s highest court could hear the appeal, likely in November.

Justice Robert Blair of the Court of Appeal agreed to continue the stay beyond mid-July, saying “irreparable harm” could ensue if he didn’t grant it.

“The practical effect of the decision if the suspension were permitted to expire on July 14 would be to legalize marijuana production in Ontario, if not across Canada,” Blair said.

“And it will invalidate many ongoing prosecutions involving commercial marijuana productions and possession offences before the appeal,” Blair told a courtroom packed with supporters of Taliano’s judgment.

“While most people in the courtroom today would applaud such a result, there is much debate about this issue in this society, including about the pros and cons as to whether marijuana is a harmless but valuable therapeutic substance or whether its consumption has harmful effects that may outweigh those considerations in the absence of a controlled regime,” Blair said.

Taliano was ruling on the case of a St. Catharines man, Matthew Mernagh, 37, who was charged with growing his own pot to treat his fibromyalgia, scoliosis, seizures and depression.

Marijuana “works best” for his pain without the harmful side effects of other medications, he said Thursday.

Mernagh and 22 other people stricken with “serious, debilitating and painful” conditions couldn’t find doctors who were “prepared to participate” in the medical marijuana program, said Mernagh’s lawyer Paul Lewin. “These people are being forced into the arms of the black market.”
at July 22, 2011

It took me a couple of hours before I came across your site.Well, this post would be of great help to anyone who would come to read this one. Thanks a lot for sharing your thoughts. herbal incense